To share your memory on the wall of Robert McDONALD, sign in using one of the following options:

Bob was born in Belfast on August 25, 1937 to Solomon and Dollie McDonald. Predeceased by his sister Betty and brother Ian and survived by his brother Morton.

Bob started his career working as a clerk at the Canadian National Railway in Toronto. In 1968 Bob and his wife Barbara and two children, Bethanne and Alan, moved to Ajax and Bob began his successful career with General Motors Canada. Bob went on to become a member of GM International and was instrumental in GM automobile assembly plant start-ups around the world.

Bob and his wife retired to a home on Horn Lake, close to Burks Falls, Ontario, where they enjoyed almost twenty years of post-retirement comfortable living.

Bob is survived by his children Bethanne and Alan; grandchildren Saxxon, Gabe, Delcinea, Eliesha and Rogan; and great grandchild Hendrick.

People wishing to honour Bob’s life can donate to any worthy cause supporting education, especially the education of girls and women in third world countries; a cause supporting the equal rights and freedoms for all; a cause that works directly in a community helping to protect victims of domestic abuse.

Please reflect on your good memories while in the company of Robert. No service, at this time, will be held in his memory in keeping with pandemic protocols.
Read Less

To send flowers to the family or plant a tree in memory of Robert Russell McDONALD, please visit our Heartfelt Sympathies Store.

Receive notifications about information and event scheduling for Robert

We encourage you to share your most beloved memories of Robert here, so that the family and other loved ones can always see it. You can upload cherished photographs, or share your favorite stories, and can even comment on those shared by others.

Posted Jun 16, 2020 at 02:04pm
To Bob's family and friends.
I am one of the volunteers at Woodingford Lodge and I came to know Bob when I began that ministry a couple of years ago.
I remember the first time that I went into his room and he was sitting in the chair in the corner of his room. I introduced myself to him and I remember his first words to me were, "Your'e not going to convert me". I laughed at that but he was serious.. I said , No Bob, I am not going to convert you.
He was quiet with me but a sober minded man and as he got my visits on a regular basis we became friends.
I remember reaching up on the shelf and taking down his wedding picture of him and his wife.
I asked him about it and he took it in his hand and smiled.
I asked him about it and where they had been married .
He shared with me that he was born in Ireland and I believe he said Dublin but possibly Belfast.
I remember telling him that I had a hymn book all the way from the Belfast Whitewell Metropolitan Church and took it out of my familiar bag that went with me on each resident's visit.
I opened it and he was showing interest and I told him that it was given to me when I was first converted to Jesus.
I asked him about his fishing days and I knew that he had enjoyed those days by the look on his face. But he was a man of few words.
I appreciated being able to take him for walks outside on fresh sunny days and I know that he loved the outdoors. When I heard the birds singing; I would stop the wheelchair and say, Listen Bob , listen to the robins singing.
The were times towards the coming to the end of his journey and while being at some of the entertainment with him... I would lean over and kiss him on the cheek and tell him that I loved him.
I remember one time that he took my hand and pulled me closer and in a teasing way ; he said to me, Will you marry me .
I loved him for that and I said of course.
I remember that I would ,mimic the Irish accent and talk with him as we strolled down the halls and the times that he was so determined to get OUT of the wheelchair and into one of the cushioned chairs in the lobby.
I learned quickly what was needed to be done to help but not to irritate him as he knew what he wanted and what he did not want.
I miss the times of being able to go and visit not only Bob but the other residents but Covid 19 has put on stop on the visitation.
The picture displayed is a lovely photo of him and I am sure that he will be missed .
I dedicate this memorial to him and to his son that I met and spoke with a couple of times and wondered how a small statue of a man like Bob could have such a tall son ..
But there you.
I say farewell to a man that lived his life as he saw it and believed.
Your friend Carol Mattice 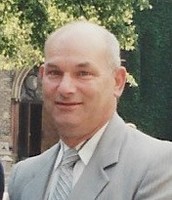 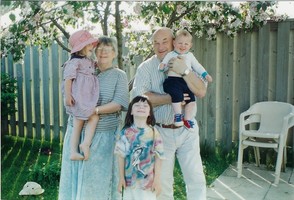 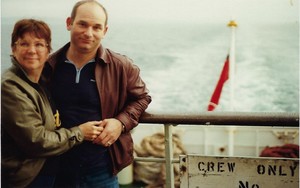 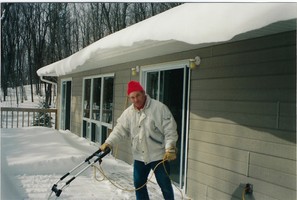