To share your memory on the wall of Peter Van Beek, sign in using one of the following options:

Peter passed away peacefully surrounded by his family in his 92nd year. His loving wife of more than 66 years, Mary, followed him five days later, surrounded by her family, also in her 92nd year.

Peter is survived by his siblings Antonia, Johannes, Petronella, Adrianna, Johanna, and Jacqueline. He is predeceased by his parents Petrus Van Beek and Petronella dePeijper-Van Beek and his siblings Wilhelmond, Marinus, Adrianus, Maria, Antonius, Wilhelmina and Gerardhus.

Mary is survived by her siblings Hendrikus, Franciskus, Wilhelmina, Adriana, Jacoba, Cornelis and Antonia. She is predeceased by her parents Adrianus Gooyers and Jacoba van Aert-Gooyers and her siblings Johannes, Adrianus, Anna, Lucia, and Johanna.

Peter and Mary were married after immigrating to Canada on April 20, 1953 in a double Dutch wedding with Mary’s brother Adrianus and bride Johanna. For more than sixty-six years, they were inseparable and could never bear to be apart. Theirs was a love that was timeless, and they are now together for eternity.

Friends and family will be received at McBeath Dynes Funeral Home 246 Thames Street South Ingersoll Friday January 10, 2020 from 2- 4pm and 6- 8pm. CWL prayers will be at 3:30pm. Mass of Christian Burial will be at Sacred Heart Catholic Church, 131 Thames Street North, Ingersoll on Saturday January 11, 2020 at 10:30 am. Reverend John Comiskey to officiate.
Memorial donations in Peter's memory to The Town of Ingersoll Memorial Tree Program (cheques accepted) would be appreciated.
Personal condolences may be sent at www.mcbeathdynes.ca
Read Less

To send flowers to the family or plant a tree in memory of Peter Van Beek, please visit our Heartfelt Sympathies Store.

We encourage you to share your most beloved memories of Peter Van Beek here, so that the family and other loved ones can always see it. You can upload cherished photographs, or share your favorite stories, and can even comment on those shared by others.

Peaceful White Lilies Basket was purchased and planted a memorial tree for the family of Peter Van Beek. Send Flowers

Posted Jan 06, 2020 at 10:14pm
Dear Loretta, Suzanne, Carla and families. In celebration of their beautiful lives. We will always remember them. With our deepest sympathy and love,

Flowers were purchased for the family of Peter Van Beek. Send Flowers

Posted Jan 04, 2020 at 09:05pm
Will miss Peter and Mary allot...have enjoyed their friendship over the years...
We will treasure all the memories created over time...
Will be on Vancouver Island for 3 months...sending our condolences to the family...
Comment Share
Share via:
HF

Posted Jan 03, 2020 at 12:06am
True love stories never have endings...... Wishing you peace to bring comfort, courage to face the days ahead and loving memories 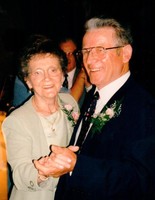