To share your memory on the wall of Gord Elson, sign in using one of the following options:

Gord was a champion fiddle player, and he loved to share his joy of music with everyone, especially with the many students of whom he taught over the years.

We would like to thank the wonderful staff and residents at Delhi Long Term Care Centre where he called home for the past year and a half. You were and are the best.

Friends will be received at the McBeath-Dynes Funeral Home 246 Thames Street South Ingersoll, Monday 1-3:45 pm. (Following provincial regulations,a maximum number of people will be allowed in the funeral home at one time, please be patient. Also, social distancing and facial coverings are required in the funeral home). A private family service will be held after.

To send flowers to the family or plant a tree in memory of Gord Elson, please visit our Heartfelt Sympathies Store.

Receive notifications about information and event scheduling for Gord Elson

We encourage you to share your most beloved memories of Gord Elson here, so that the family and other loved ones can always see it. You can upload cherished photographs, or share your favorite stories, and can even comment on those shared by others.

Chrissy Baratta & Family and C dowden sent flowers to the family of Gord Elson.
Show you care by sending flowers

Posted Oct 07, 2020 at 08:19am
We met Gord at either a fiddling jamboree or competition when my brother and I were just teenagers. Both, my brother and myself competed and Gord was a well-known and respected fiddler. Gord and Joyce would come to our place and Gord would help us perfect our reels or jigs. He was such a kind and gentle man.......and had unending patience!! He and my brother even played at my wedding several years later! It was so special for me, as Gord played such a big part in my teen years. So many good memories!
My deepest condolences to his family.

Posted Sep 30, 2020 at 06:07pm
So many memories of a wonderful smart man, a musician, a father.a grandfather, a teacher , and a friend to everyone who enjoyed old time music. No one could play a waltz sweeter than Gord Elson, we will all miss him and his talents for years to come. REST IN PEACE. Prayers and condolences to all the family
Comment Share
Share via:
JA

Posted Sep 27, 2020 at 11:47pm
You don't have time to read the stories of Gord from days before most of you had memories. The most outstanding: the house-building. When Joyce and Gord moved into that house it was not actually a house Yet. A basement with a flat roof; a small kitchen, bathroom, bedroom, living room. And furnace room, which held David's crib. But they had plans. Thus one sunny, July (?) day we began work: tearing off the tar-paper flat roof; construction the frames for the walls. Before we could erect those walls though, nature decided to play a joke: rain. Buckets and buckets of rain. The plans had included rols and rolls of heavy plastic for just such an occasion; but nature does not like plans, and to offset that picked the most awkward time. There we were, spreading 10 mil plastic over everything, including the 2x4 frames still lying on what waas no longer a roof but a floor. And the rain soon filled every depression in the frames, in those plastic pockets, and then spilled out. That night, rain continued; dripped through what had been the roof through what was still the ceiling in the basement rooms. We watched as the light globe in the bathroom filled with water; Gord's dad sat and watched tv, with buckets to his right, left and in front of him. To a puzzled look he shrugged: not much you can do but wait 'til morning. In the morning, sunshine; and every night for two weeks, until the roof was up and shingled, Gord and I covered everything with plastic -- a job that got more interesting as time passed, and ended with us draping plastic over the roof trusses before the roof boards were installed. Every day was different, and we often finished the last nail at 2-3 a.m. Gord was a bit of a nighthawk, but i'm not sure the neighbours appreciated all the efforts.
And a footnote: it never rained again; think of all that wasted plastic.
We will miss that inquisitive mind, the puckist understated humor, and most of all the tunes. In the Swan family we had a tradition especially at Christmas, when Grandpa Henderson would get out his fiddle, Mom would chord, and we all bounced and laughed. When Joyce brought Gord into the family we knew from the beginning that he was a keeper -- he pulled out his fiddle and joined in. The music continues to this day.
It is with a heavy heart that I write this; there could be a book; should be a book to tell all we can about Gord's life and laughs. I cannot join for last good byes. I've said it in prayers and memories -- and looking at the photos of Gord and Joyce, with a few tears.
My thoughts, hugs and prayers to all the children, grandchildren, great-grandchildren: cherish his memory. He was special. 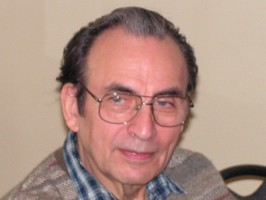 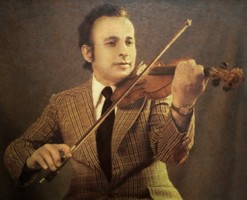 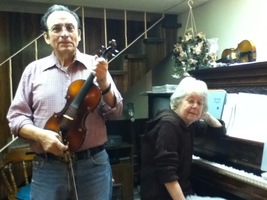