To share your memory on the wall of Michael HENNESSY, sign in using one of the following options:

Print
Hennessy, Michael John passed away peacefully on Saturday May 23, 2020 in his 95th year.

Beloved husband to Daphne for 67 years. Predeceased by his parents John and Alma, and his brother Patrick, New Zealand. Survived by his sister Chant... Read More
Hennessy, Michael John passed away peacefully on Saturday May 23, 2020 in his 95th year.

Beloved husband to Daphne for 67 years. Predeceased by his parents John and Alma, and his brother Patrick, New Zealand. Survived by his sister Chante, British Columbia. Proud father of Wayne, and his wife Diane (Markham), of Fonthill, and Craig, and his wife Trish (Arts), of Egmondville. Loving grandfather of Matthew, Nathan, Gillian, Hannah, Alysha (Joel Wellington) and Jessica. Great grandfather to Findley, Piper and Felix. Special Uncle to many nieces and nephews and their families from Ontario to British Columbia and New Zealand.

Michael was born on November 11, 1925 in Kajang, Malaysia and moved to Christchurch, England at a young age, shortly after his father passed away.

Michael attended boarding school with his brother Patrick, and enlisted early, to serve in the Allied Combined Forces during WWII, where he was posted to a converted aircraft carrier, HMS Battler, stationed in the Indian Ocean.

After the war he returned to England where he studied to become an engineer and where he met and eventually married the love of his life Daphne, on July 25, 1953.

Several years later he managed to talk Daphne into immigrating to Canada, the first of their many adventures. They travelled to New York on the SS Queen Mary (the first one), and then made their way to London, Ontario where they settled and started their family.

In 1967 they moved to Ingersoll where he managed the Moto-Mower facility for several years and eventually changed careers to become an educator at Fanshawe College in the Business faculty. During this time, he was also very involved in the Ingersoll Optimist Club, eventually becoming President, supporting youth and other causes in the community.

At age 65 he retired from Fanshawe and he took a teaching position in Abu Dhabi at the Women’s Campus of Higher Colleges of Technology. Over the next two years, Michael and Daphne travelled around the world several times, while coming back and forth for vacations at the cottage every summer. While in Abu Dhabi, he received the Founder’s Award for his services to the school.

On their return from Abu Dhabi, Michael and Daphne again settled in Ingersoll and Michael started his next career in town politics. His ‘Worship’ served two terms as Town Councillor and two terms as Mayor and championed long-term fiscal sustainability and infrastructure renewal as his primary concerns.

Just shy of his 80th year, Michael gave up politics and decided to retire again. However, he soon found himself involved with a few Boards and programs, the Lunch Bunch, the Ingersoll Center for Seniors, the Library Board, the Ingersoll Foundation to name a few and most recently he was a member of the Oxford Patient Family Advisory Committee, working for the betterment of hospital patient services in Oxford County.

In 2004 he was honoured by being named Ingersoll Citizen of the Year by the Ingersoll District Chamber of Commerce.

He enjoyed working with his hands and became an accomplished wood carver in his later years, while enjoying time with all his ‘wood carving buddies’ at the Seniors Center.

The two constants in his life were the cottage at Hillsborough and his family. He fell in love with the cottage in the early 1960’s and was never happier than when he was offering gin and tonics on the deck, surrounded by family and friends.

Cremation has taken place and a celebration of life will occur later.

In lieu of flowers, donations to the Ingersoll Centre for Seniors or a charity of your choice would be appreciated.

To send flowers to the family or plant a tree in memory of Michael John HENNESSY, please visit our Heartfelt Sympathies Store.

Receive notifications about information and event scheduling for Michael

We encourage you to share your most beloved memories of Michael here, so that the family and other loved ones can always see it. You can upload cherished photographs, or share your favorite stories, and can even comment on those shared by others.

Posted Jun 07, 2020 at 12:12pm
Craig and family,
So sorry to hear of your loss. Your Dad was indeed a fascinating man.
Colleen Aarts(Robb)

Posted Jun 04, 2020 at 12:31pm
Mr Hennessy was my teacher at Fanshawe College, in 1985/86, when I decided to pursue an education in Purchasing. He was simply a fantastic instructor, and a great person. He really helped me with my career choice, as there was many paths to take, but his class was by far my favourite. I learned so much, and have been fortunate enough to have a career in Purchasing for the past 30 plus years. I am so sorry to hear of his passing. He was simply wonderful. My deepest condolences. Karie Forster
Comment Share
Share via:
CW

Posted Jun 01, 2020 at 11:16am
Sincere sympathies to Daphne and family. Mike was a great and friendly supporter of Ingersoll Services for Seniors and most instrumental in persuading Ingersoll Town Council to provide it with initial and on-going funding. He was a friend to all, great and small and always had a positive attitude. Michael made the most of his years and proved that 90 plus can still be “young”! A great example to us all.
We will miss you Michael!
Cathy and Ernie Wilson

Posted May 29, 2020 at 06:39pm
Craig, Trish, Daphne and Family. Please accept our most heartfelt sympathies. It was always a pleasure getting to visit with Michael at the cottage.

Posted May 29, 2020 at 04:37pm
Daphne & family:
Please accept my sincere condolences on the recent passing of Mike. The years that Mike and I worked together on Oxford County Council and the County Library Board, as well as a few other committees, I always admired his ability to stay calm, focused and thoughful with his questions and answers and shared his thinking on why he made his decision on his vote. Mike was a very kind man and always a gentleman which I really appreciated and it was always a pleasure to met up with both of you at some of the Ex County Councillor's re-unions, and we could chuckle about some of the "good old days" of municipal government.
The wording of his obituary and all the accomplishments he had achieved was remarkable and the picture you chose was how I will remember him, really never aging at all.

Thinking of you at this time. 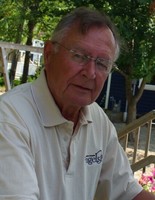