To share your memory on the wall of Mary FAIRBANKS, sign in using one of the following options:

Passed away on Friday July 17, 2020 at VON Sakura House, Woodstock.

Mary was born in Middleton, Nova Scotia and came to Ingersoll in August 1951.

Passed away on Friday July 17, 2020 at VON Sakura House, Woodstock.

Mary was born in Middleton, Nova Scotia and came to Ingersoll in August 1951.

Predeceased by her husband Bob of 53 years, her parents Aseph and Grace Daniels, and her in-law-parents Henry and Lilly Fairbanks. She is survived by her sons Troy (Darcey) and Brad (Buffy). Grandchildren Michael (Cassondra), Zach, Tiffanie, Brooke (Jaylen) and Britany, and great grandchildren Luna. Also survived by one brother Paul (Avora), and sisters Carolyn, Shirley (Paul), Sylvia (Dave), and Diane (Garry). Several nieces and nephews. In-laws Carol, Una, and Jim. Predeceased by brothers Robie, Willis, Beneford, Murray, John, and niece Michelle, and in- laws Marjorie, Hughena, Sid, and Don. Very dear friend of Mary Fulton, Helen Downham, Cathy Fairbanks, and Sharen Collins who were always there for her.

To send flowers to the family or plant a tree in memory of Mary Lou FAIRBANKS (Daniels), please visit our Heartfelt Sympathies Store.

Receive notifications about information and event scheduling for Mary

We encourage you to share your most beloved memories of Mary here, so that the family and other loved ones can always see it. You can upload cherished photographs, or share your favorite stories, and can even comment on those shared by others.

Posted Jul 31, 2020 at 10:24pm
Troy, Darcey, Brad, Buffy and Families;
We are just now hearing that your Mom passed away. We are so sorry for your loss. Your Mom was a kind lady and always had a smile and a pleasant greeting each time we saw her. We shared many fun times with your Mom and Dad at Fulton visits.
Cherish the memories and hold them dear and near to your hearts. Thinking of you all.
Don & Debby Klemp
Comment Share
Share via: 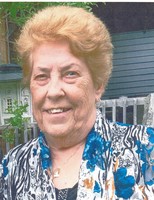