To share your memory on the wall of Kenneth TUCKER, sign in using one of the following options:

Ken was born and raised in the Woodstock area where he married his first love Connie Gingerich and they had two beautiful children, Audra, and Jason. When jobs were slowing down in the area, Ken moved his family north and bought a farm (he always was a farm boy at heart). He had his own logging business, K.E.T., which he ran a few years until the economy changed and Ken went to work on the railroad building tracks. Due to being away from his family so much, Ken left the railroad and got a job at the local wafer board factory in Englehart where he worked for a number of years. Ken loved working with his hands, building stuff. Even when he was so sick and in pain with cancer, he built beautiful planter boxes for our vegetable garden and a one of kind mailbox. Ken loved to do automotive body work and paint cars. He was also a certified arborist. He would never back down from a challenge. Ken was a very safety conscientious person and received an award at the wafer mill for 1,000,000 man hours accident free. Ken was a joker and had that “joker smile”. Ken always wanted to make everyone laugh.

When Connie passed away in 2000 from cancer, Ken decided it was a time to move back home to where the “corn grows” (the Woodstock area).

Ken’s sister-in-law, Carol, aka Gladys, wanted Ken and I to meet. I had knew of Ken all of my life. Finally, September 2004, I agreed to call Ken and we talked. I had plans to go to a singles dance with a girlfriend and we agreed we would meet the next day. Six months later, March 12, 2005, we were married and from that day on, we did everything together. He would often say, I really like it when we work on things together, and I had lots of things for him to do.


We moved to Happy Hills, just outside of Embro, to downsize and hopefully buy a cottage between the kids in Pembroke and here. Again the economy took a downturn and a cottage was out of the question but we had lots of projects. Ken worked as a Heavy Equipment Operator, and five years ago when work got tough, Ken took a job in Georgetown where he would stay in a camping trailer during the week and come home on Friday night. Then in 2017, Ken had heart attack. He recovered but never enough to return to work. 2019 Ken was diagnosed with Tongue Cancer. Ken survived the surgery, of which I was overjoyed and received Chemo and Radiation treatment. Then in March of this year the pain came back and so we had more tests down. The pain was escalating. More cancer was found in the jaw and it was aggressive. The pain was so intense we couldn’t control it.

On July 10, Jason, Mary and the kids come and Ken had two wonderful days with them. After the kids left to go home, Ken went to lay down. When I checked him a little later, he was unresponsive. I called the kids and Barry and Carol. Our neighbour, Pat came to my rescue, as she had worked with palliative care patients. She just took over and confirmed he was going to leave us. Thank you so much Pat for everything you did. You were a godsend to Ken and I. I told Ken to wait for Barry and Carol, who were on their way. Some neighbours came to say goodbye and then Ken and I listened to country music together and waited for Barry and Carol. I kept saying, they’re coming. They arrived and about a half hour later, Ken finished his journey to heaven (maybe heaven could only let so many in at a time too).

That morning, while Carol, Barry and I were having breakfast, Barry said, “I am sad but my heart is so full of happiness because Ken has no more pain” and Carol and I both agreed.

I love you baby. I am glad you are pain free. I will always love you and miss you. I will remember you and I will set you free.

In lieu of flowers a donation can be made in Ken’s name to the local Food Bank or a charity of your choice.
Read Less

To send flowers to the family or plant a tree in memory of Kenneth Eugene TUCKER, please visit our Heartfelt Sympathies Store.

Receive notifications about information and event scheduling for Kenneth

We encourage you to share your most beloved memories of Kenneth here, so that the family and other loved ones can always see it. You can upload cherished photographs, or share your favorite stories, and can even comment on those shared by others.

Posted Jul 24, 2020 at 05:31pm
Sorry to hear that Uncle Ken has passed away. I had know idea he was battling cancer. I hope and pray he was a follower of Christ Jesus so we can see him again in heaven. We will miss him.
I remembered he had a good sense of humor. He used to call me Nickel.
God Bless!
Ken, Nicole, Ryan and Rachel Renkema
(Gingerich)
Comment Share
Share via:
D

Posted Jul 15, 2020 at 03:49pm
Ron and I were so sad to see Kenny go, but we know that he is in a better place with no more pain. We will surely miss seeing him on the porch or working around the yard. We so enjoyed all the times we spent around the fire, with Ron and him singer in the speakers in the shed lol. Will miss you so, till we meet again.
Love Donna and Ron
Comment Share
Share via: 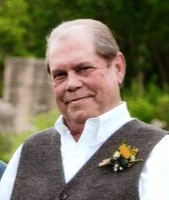