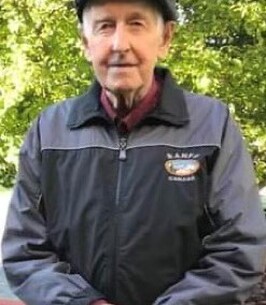 Douglas McKay Bragg died peacefully at Alexandra Hospital Ingersoll on May 1, 2022 in his 92nd year.

Doug Bragg, formerly of Cambridge, was the son of the late Clarence and Luella Bragg.

Doug grew up on his family’s busy dairy farm in Sweaburg with his parents, two brothers and eight sisters. He worked at the Department of Parks and Recreation, City of Cambridge, as a forestry foreman for many years.

Doug enjoyed travelling, carpentry and working on his hobby farm where he planted many trees over the years. He was also an avid Blue Jays fan. He enjoyed lawn and carpet bowling in his later years where he made many new friends. He was a member of the Baptist Church in Ingersoll for several years.

Cremation has taken place. A memorial visitation will take place at the McBeath-Dynes Funeral Home, 246 Thames St. South, Ingersoll, Ontario on Friday, May 6, 2022 from 12:00 to 1:00 p.m. followed by a funeral service. Interment to follow at Ingersoll Rural Cemetery.

As expressions of sympathy donations may be made to the Canadian Lung Association or to the Ingersoll First Baptist Church.