To share your memory on the wall of Auriel CLEMENTS, sign in using one of the following options:

Peacefully at VON Sakura House Woodstock on Tuesday May 19, 2020. Auriel Clements of Ingersoll in her 91st year.

Peacefully at VON Sakura House Woodstock on Tuesday May 19, 2020. Auriel Clements of Ingersoll in her 91st year.

Beloved wife of the late John Clements. Loving mother of Chris and Richard.

Mom was a very special person, she loved flowers and had a beautiful english garden. Auriel loved her friends at St. James and the Ingersoll Senior Centre where she enjoyed many activities including bridge, world issues, current events, and bus trips. She was always on the go and she volunteered for a lot of different things. She had a connection with many people and lived a good life.

Mom was born in Hope Cove, Devon county, England and emigrated to Canada in 1958. She was a registered nurse for thirty years and a one of a kind, unique lady. Many friends and family will miss mom.

A celebration will be set for her later.

Donations can be made to St. James Anglican Church.

To send flowers to the family or plant a tree in memory of Auriel Dawn CLEMENTS (Turner), please visit our Heartfelt Sympathies Store.

Receive notifications about information and event scheduling for Auriel

We encourage you to share your most beloved memories of Auriel here, so that the family and other loved ones can always see it. You can upload cherished photographs, or share your favorite stories, and can even comment on those shared by others.

Posted Jun 06, 2020 at 03:09am
I want to express my sympathy to Chris and Richard . We were childhood friends and I spent an incredible amount of time at their home . Auriel always made me feel welcome in their home which was always immaculate . Even as a child I recognized the passion she had for her garden which was always stunning .
I am sorry for your loss.

Thanks Richard for your kind note and memory of Mom. I think about you and our childhood friendship when I pass your old home, I also recall you working at the Elm Hurst many years ago. All the best from Richard and Chris
JT

Posted May 22, 2020 at 05:34pm
I am one of Auriel’s former neighbours. I used to live behind her place in the late 1980s. Shortly after I moved into my house, Auriel warmly greeted me at the back fence that separated our properties. In the four years that followed, we would occasionally meet at the same spot during the spring and summer and have a nice chat. I remember her once sharing with me that her father had been one of the thousands of British soldiers trapped on the beaches at Dunkirk in 1940. I don’t know why that fact stuck with me, but it did.

I moved away from the neighbourhood in 1991, and not long afterwards, Auriel phoned me one evening to ask me about a car that she was thinking about buying. She knew or had heard that I owned the same model of car, and she was interested in my opinion on its reliability. The last contact I had with her was when I sent her a brief condolence letter when her husband John passed away. After that, I regret to say that I never really had much cause to think of her.

That is, until yesterday morning, May 21st. I can’t explain the reason, but it was then that Auriel suddenly popped into my mind. In thinking about her, I wondered if she were still alive. I concluded that she must be. But just six hours later, I happened to visit this website and was surprised to see her obituary. I can’t account for this coincidence, but could it be that the recent dead can communicate in some manner with the living from beyond the veil that separates their world from ours? Obviously, we can never know the answer for certain, but the question is worth asking and is one that most of us have considered.

In closing, I would like to extend my sympathy to Auriel’s two sons, Chris and Richard, who I know will greatly miss their mother’s wisdom, support and, above all, her love.

Farewell, Auriel. You were a nice lady, and I’m glad that I was able to meet you all those years ago.

Hi John, thanks so much for sharing that story about mom. That is something to be in tuned like that about her. She spoke highly of you and of course we really appreciated the back yard fence you installed. I'm glad you got to have with those moments with her. -Richard (son)
LR

Posted May 22, 2020 at 02:22pm
Heartfelt sympathy to you in this difficult time. I always appreciated Auriel's kind words and wonderful hugs. I am sad I will no longer enjoy conversations with her at the grocery store or see her at church on Sunday mornings. I trust your many memories will support you through this time. Llyn Roode
Comment Share
Share via:
RC

Thank you Lynn, for the kind words. She often spoke of you and its just nice that you had that connection with her. All the very best - Richard
RC

Posted May 22, 2020 at 09:40am
I always enjoyed Auriel's friendship over the years, first as the involved, knowledgeable parent of the boys at Princess Anne School and in later years as I met her at the annual Horticultural Event at Bill Thorpe's garden centre. Her mind was always sharp and well versed on world events. My sympathies to Chris and Richard. Her delightful personality will certainly be missed.
Ron Case
Comment Share
Share via:
RC

Hi Ron, Your kindness has spanned a lot of years, you were my favourite teacher! I was always fascinated with your immense size and cool calm. Im glad you got to know mom over the years I know we had conversations about you occassionaly at the dinner table. All the best Ron and thanks for sharing your memory. -Richard

Posted May 21, 2020 at 07:24pm
i will never forget talking to Auriel when she was walking the bassett hound and needed help getting her home because she decided her walk was over, it was fun getting that stubbon dog to move. When I first started going to the horticultural society meetings I got a ride with her. I will miss seeing her at the store coming through my till. My deepest sympathy Richard and Chris. RIP sweet lady from Sharon Donnelly
Comment Share
Share via:

The Hachborn family sends our deepest sympathies to you Richard and Chris. She was such a beautiful lady and lived her long life with such dignity and grace.
RC

Thank you Sharon for your thoughts and good memories of mom. We always liked coming through your till at Independent so we could have those conversations with you. All the very best - Richard
RC

Hi Cheryl, thank you so much for your friendship and support you gave mom and the family all those many years as a neighbour and at the library too. All the very best, -Richard
3 Comments | Show All 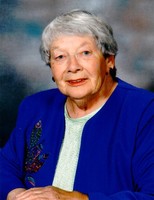