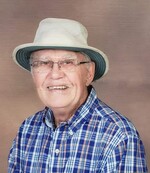 Passed away suddenly in his 82nd year at Winterset RV Resort in Florida on March 29th, 2022. Augie was born in Rotterdam to Wiepkje (nee Nolle) and Dirk C. Apon. In September 1954, his mom, and siblings Sya, Anna and Fred flew to Toronto, where his father had already immigrated.

He attended Ryerson College for a short time, before transferring to the University of Waterloo where he obtained his Civil Engineering degree. One of his first jobs was working for a paving company answering phones and providing quotes. He then worked for Pre-Con Murray and Jespersen-Kay before running his own businesses for over 40 years working as both a structural and precast engineer.

He loved living beside his daughter Adele, being close to his grandchildren and walking his dog Toby to the river behind his house.

He enjoyed spending his winters at Winterset RV Resort in Palmetto, Florida. With the pandemic he was not able to go back until this past January, so this year’s trip meant a lot. On the day he passed, he was looking forward to the road trip home with his son-in-law Glenn. Augie liked to travel, was an avid photographer, appreciated the theater, played organ and piano, and sang in mass choirs for many years.

To those who knew Augie or crossed paths with him, they will have a story to tell. He loved to share his opinion on all things including finance, law, and government. You could always count on him to make the time for a good chat over a cup of coffee.

Friends will be received at the McBeath-Dynes Funeral Home 246 Thames Street South, Ingersoll Thursday April 14, 2022 from 4:30-6:30pm (Masks required). A celebration of his Life will be held later.

In lieu of flowers donations to Heart and Stroke and Cats Anonymous.

]Personal condolences may be posted at www.mcbeathdynes.ca